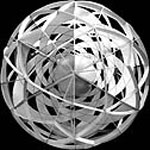 The Millennium Sphere was Cooper Union's submission for an international time-capsule competition sponsored by the New York Times Magazine. The project was designed in the Fall 1999 semester by professors Jean Le Mée and Manuel A. Baez along with a team of Cooper Union Students. The proposal was chosen as a finalist (honorable mention) and was included in an American Museum of Natural History exhibition in New York City.
This website documents the Cooper Union's submission. 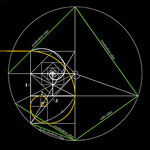 The "Ad Quadratum Construction and Study of the Regular Polyhedra" text describes the design principles behind the Millennium Sphere time capsule submission. It considerably simplifies and unifies the understanding of the structure of all regular polyhedra-convex and stellated-and integrates it quite naturally into a rich tradition of speculative thought be it geometrical, musical, astronomical or philosophical that has been part of our intellectual heritage for centuries.
Click here to read the text [PDF]

The Challenge of Abul Wafa

Abul Wafa was a Persian philosopher, mathematician and astronomer who worked in Baghdad. Among other things, he developed the field of trigonometry. He is also credited with ‘the feat of drawing all five Platonic solids using only a straightedge and a pair of compasses at a fixed setting.’ Such fixed compasses (known as ‘rusty compasses’ have been the tools of virtuoso geometrical draftsmanship in many periods.

We would like to show here, without laying claim to virtuosity eleven centuries after, that the deed can easily be accomplished. Indeed it is already outlined in Euclid’s Elements. We first look at Euclid’s method and then propose an approach based on the Maraldi angle.
Click here to read the text [PDF]