Leonardo and his
Flying Machine

On the Motive
Power of Fire

For a Common Language in the House of Poetry

The title "The House of Poetry" was that adopted for an exciting Leo Leonni Seminar offered in 1995 and 1996 to a small group of students at the Cooper Union. Faculty and speakers from the three schools and from the faculty of Humanities and Social Science collaborated in the design and implementation of the seminar. Each year Professor Jean Le Mée presented a couple of lectures in these seminars in addition to those presented in his course on Design Illusion and Reality (EID 111). The present opuscule is a compilation of lecture notes that have been used on these occasions, organized in a more unified and systematic way than had been possible before. The slide presentation format and the terse, and at times, perhaps even cryptic wording, have been retained from the lecture notes. This permits a quick glance at the material but is also an invitation to reflection and argumentation between pages on a page-to-page reading as it would in an oral presentation. Its purpose is to introduce students of engineering in particular but also of architecture and art, to a wider concept of design than they may generally meet in their more specialized courses. It is an effort to widen their horizon and help them see design in places where they might not expect it, as well as to frame it within a more philosophical and poetic context than they may be used to.

Leonardo and his Flying Machine

This CD-Rom was developed in conjunction with the course EID-103 - Principles of Design. To show students the importance of the relation of physics, mathematics, engineering science, materials, experiment design, synthesis, and analysis, we have prepared for them a text and CD-ROM on Leonardo da Vinci and his flying machine, where we show that, in spite of all his genius, Leonardo could not succeed. It is an interesting, amusing, yet sobering lesson. In order to reach a wider audience, we have made this CD-Rom, part of an exhibition of Leonardo's flying machine models built by students at New York City Technical College, under the direction of Professor Razukas. The exhibitions have taken place at the library of the college, and at the Gallery of Brooklyn Union Gas Company at MetroTech in Brooklyn, NY. This last exhibition was featured on Today (Channel 11) and also in the New York Post.
>> If you would like to view this presentation please contact Jean. 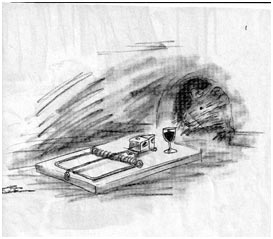 A Better Mousetrap, Patents and The Process of Invention was an exhibition at The Cooper Union for the Advancement of Science and Art which was developed in course EID 111, Design, Illusion and Reality by Professor Jean Le Mée and a group of students from the schools of art, engineering and architecture. The exhibition illustrates not only the history of patents and of the patents system, but also the very process of invention as inventors go about their business. This virtual tour features highlights from the exhibition which showcased over 100 nineteenth century patent models, court cases which have shaped the American Patent System and a look at the lives of some famous inventors and their Patents. This exhibition attracted a large audience and was featured in the New York Times Art Section, the New Yorker magazine, and Mechanical Engineering, the ASME journal, of April 1991.

On the Motive Power of Fire

This website is the documentation of an exhibition of working steam engine models which took place from December 17, 1997 to January 8, 1998 at the Electrokinetics Gallery on Lafayette Street in New York City, under the auspices of the American Society of Mechanical Engineers (ASME) and the Science and Technology Mission of the French Embassy in Washington, DC. The exhibition was a great success. More than 300 people attended the opening and several hundred more saw it before its closing. This exhibition was developed in a course EID 111 - Design, Illusion and Reality, an elective offered to students of Engineering, Art, and Architecture with funding from the Gateway Engineering Education Coalition. Its interdisciplinary approach enlarges the concept of design that students are exposed to. Group projects emphasize considerations of the interplay between ideas, concepts, values and technical realization in their social, intellectual and historical context. The material presented here can be used as supplementary material for courses in Design, Engineering Science, Society, and Technology, History, New Liberal Arts programs or other such programs. It can also be of interest to the public at large.