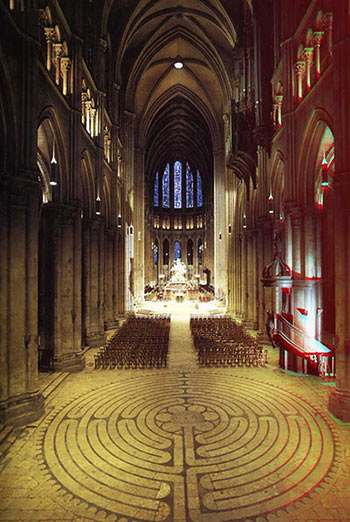 The structure of the labyrinth in the Cathedral at Chartres points to its possible and probable use for astronomical demonstrations and calculations. The numbers and geometry involved may clarify the fundamentals of celestial mechanics from the geocentric viewpoint consistent with twelfth century knowledge as well as the performance of the computus for determining the date of Easter and all moveable feasts of the liturgical year.

Using an algorithm based on Bede’s De temporum ratione (The Reckoning of Time) real people or pawns may be moved on the labyrinth itself, or on a small or imaginary replica of it, to calculate the date of Easter. It might have therefore been used as an educational tool at the School of Chartres in the early thirteenth century for teaching astronomy and mathematics besides the liturgical, mnemotechical and spiritual usages that we will explore elsewhere.

The Labyrinth at Chartres, the Malachy Prophecy,
and Benedict XVI

Arnold de Wion, a Benedictine and a native of Douai in the French Flanders, published at Venice in 1595 a panegyric of the most illustrious members of his order. Commenting on St. Malachy, a 12th century Archbishop of Armagh, Ireland, and a friend of St. Bernard of Clairvaux, de Wion mentions a prophetic vision regarding “the succession of the popes from the 12th-century until the end of the world,” said to have occurred to Malachy.

There has been considerable controversy over the authenticity of this prophecy in the more than four hundred years of its publicly known existence. The official opinion of the Vatican nowadays is a “cautious denial” of its authenticity. Nevertheless, the prophecy is intriguing and has held the interest of would-be sleuths of various persuasions and intentions for centuries. The approach of its possible resolution in time has, of course, heightened its interest among the apocalyptic fringe.

It is generally accepted among serious scholars, however, that the prophecy is not Malachy’s in the twelfth century but more likely from someone else in the sixteenth century, when it emerges in public view. Some consider it entirely spurious; some, prophetic in part.      Authentic or not, the concordance between numbers found in, or deduced from, the prophecy and those in the Chartres labyrinth show the prophecy as having a numerological structure that conforms, as that of the labyrinth, to the cycle of Easter. The theme of Easter— tribulation, passion, death and resurrection—reinforces the apocalyptic message of the prophesized reign of Petrus Romanus, the presumed last pope, while making it resonate to the strong note of hope of Easter.

In any case, the quasi-unprecedented gesture of Benedict XVI, through its own numerical symbolism, throws in a new twist and would appear to add credence to the probability of the realization of the Prophecy, though it does not affect its attribution to Malachy or someone else.

>>The Labyrinth at Chartres,  the Malachy Prophecy, and Benedict XVI

So many stories and legends presented as historical truth have been told, and still are told, about the Templars and Chartres that it is important to try to assess within our period of interest—the twelfth and thirteenth centuries broadly defined—who they truly were and what influence, if any, they may have had in the region and, in particular, on the design and building of the cathedral as is often stated.

As the Oxford historian Christopher Tyerman warns, we have to guard against the myth surrounding the Knights Templar — “their popular elevation into a sinister, cultic, secret society, guardians of ancient mysteries.” This is not to deny, however, that, at times, tradition and legends may conceal elements that may lead to useful insight. But the essential is to stay clear of what another historian terms the “parallel universe of Templarism.” The historical fresco synthesized from the findings of academic historians is colored and tragic enough without “parallelistic” accretions — as is often said “reality surpasses fiction.”

In the following we briefly examine the origin of the order in the early twelfth century at the dawn of the crusades, and look at its development until its suppression in the early fourteenth century. We then consider in more detail its presence in the region of Chartres during its existence and what influence this might have had relative to the cathedral.