Katharine Le Mée has explored a number of "career choices"—mother, teacher, author, and healer. Her formal education includes a B.A. in French, an M.A. in General Linguistics, both from the University of Rochester, and a Ph.D. in Romance Philology from Columbia University. In addition, she has completed certification in Pastoral Care and Counseling at the Blanton Peale Graduate Institutes of Religion and Health in New York City and has taken numerous courses in modalities that utilize the self-healing properties of the human energy field.

Katharine has taught French and Language Teaching Methodology at the University of Rochester, Columbia University, and Baruch College (CUNY) and also in high schools in New York and New Jersey. In the summer of 1993 she was invited by the faculty of the Technical University in Leningrad (now St. Petersburg), Russia to lecture on Methods of Teaching Foreign Languages to a group of instructors coming from all parts of what was then the Soviet Union.

In 1994 Katharine was asked by her friend Toinette Lippe, editorial director of Bell Tower, a former imprint of Random House, to write a book that would explain to the general public what they were really listening to when they put on the popular recording "Chant" sung by the Benedictine monks of Santo Domingo de Silos in Spain—a CD that topped the pop charts and eventually made its way into sixty different countries, purchased by over six million people. The result, Chant: The Origins, Form, Practice, and Healing Power of Gregorian Chant was widely appreciated in the United States and abroad and was translated into Spanish, Portuguese, Japanese and Dutch.


In 1998 Katharine was approached by the then-Abbot Primate of the Benedictine Confederation in Rome to help to create materials that would celebrate the contributions of Gregorian chant, sung by the Benedictines as part of their daily prayer for more than 1500 years, to the development of Western sacred music. A new translation of St. Benedict's Rule by Abbot Patrick Barry, OSB would offer the spiritual basis for the chant.

A series of three CDs would illustrate the development of the music from the simple line of the plainchant to the complex polyphonic music we have today; and the book, written by Katharine, would explain the actual development. This book, The Benedictine Gift to Music, was published by Paulist Press in 2003 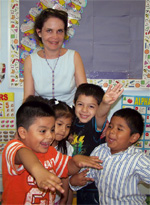 For a number of years Katharine has been interested in the human energy field and has studied extensively with intuitive healer Peter Roth. This training has led to Katharine's newest "career"-work as an intuitive healer, where people may be helped spiritually, emotionally and physically by information accessed through the field. Her work in Thought Field Therapy and Emotional Freedom Technique, two important healing modalities, is detailed in another section of this website.

Katharine and Jean’s daughter, Hannah Le Mée O’Connor, has NJ certification as a teacher of children from Pre-school to Grade 3 and also the TOSD (Teacher of Students with Disabilities). She is currently teaching in New Jersey.