A Millennium of Music: The Benedictine Tradition

This collection of three compact discs, commissioned by the International Order of Benedictines to mark the beginning of the new millennium, is specifically designed to illustrate the development of Western music from its early roots in Gregorian chant to its polyphonic elaboration at the end of the twentieth century.

On CD#1, Adoration: Music of Worship, monks and nuns from eleven different Benedictine monasteries and convents chant selections from the Mass and the monastic hours, following the pattern of the liturgical year. Although all examples are inspired by the work of the Abbey of St. Pierre de Solesmes in France, each illustrates regional nuances of the Latin chant.
View content and liner notes, [PDF]

CD#2, Celebration: Music of Devotion, includes vocal and instrumental selections from the Baroque and Classical periods by Palestrina, Aichinger, J.S. Bach, D. Scarlatti, and W.A. Mozart, all originally rooted in the chant liturgy. The commissioned Te Deum, composed by Johannes Somary, combines the traditional Latin text with quotes in French, German, English, and Italian taken from the Prologue of the Rule of St. Benedict. Inviting both celebration and serious reflection, this cantata illustrates a rich variety of musical styles, traditional and contemporary.
View content and liner notes, [PDF]

On CD#3, Exaltation: Music of Spirit, are presented choral and instrumental masterpieces of the 19th and 20th centuries by composers Beethoven, Schubert, Bruckner, Rossini, Fauré, and Messiaen, all inspired directly by Gregorian chant or the Roman Catholic liturgy. American composer Stephen Perillo provides a commissioned Magnificat, a joyful contemporary musical setting of the traditional Song of Mary sung daily at Vespers by Benedictines throughout the world.
View content and liner notes, [PDF]

The Benedictine contribution to this magnificent musical heritage has included, first and foremost, the faithful, daily chanting of the Gregorian liturgy, as prescribed by St. Benedict, for the past fifteen hundred years. Without this prayerful, persistent, musical remembrance of God, the chant melodies and their polyphonic elaboration might have been lost forever. Many specific chants, anthems, and religious dramas have been composed by Benedictines-from Gregory the Great through Abbess Hildegard von Bingen to the creative works of American monastics of our time-and countless monks and nuns have been engaged in their editing, copying, and preservation. It is our hope that listeners will find these offerings spiritually inspiring and culturally rewarding.
These recordings are no longer available.


A Metrical Study of The Lais of Marie de France 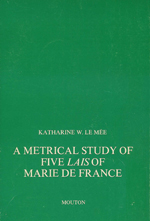 Much of the structural unity of poetry is the result of the total or partial repetition of many different types of patterns. In this doctoral thesis, presented at Columbia University in the City of New York, Katharine points out that, traditionally the attention of metricians has been drawn primarily to rhyme and to the number of syllables in the line, often to the apparent neglect of other linguistic elements which may also reveal patterning.

By contrast her thesis focuses on the rhythmical patterns in Old French which derive from the presence of the stress accent, an accent which has largely been lost in the modern spoken language. Another area of interest, seemingly also neglected in the past, is the freer word order characteristic of the older language and the resultant variety of possible syntactic patterns which can thus occur in it.

There is a tendency today to regard Old French poems as texts to be read silently-a procedure probably not in keeping with the original intent of their authors. Katharine points out that she has long been fascinated with oral presentations of these early works that she has been fortunate enough to hear. Recited aloud, the poems gain a quite startling vitality which is often not fully appreciated by contemporary students.

This thesis provides a linguistic analysis of five of the songs of courtly love or "lais" written by France's first woman author, Marie de France, and recited by the wandering jongleurs of the twelfth century.

This book is available through selected libraries.